I remember, back before the Internet, when the only marine weather forecast available was from a grainy automated voice that would broadcast repeatedly over the VHF with very basic forecasts that covered large expanses of water. “Forecast for the outer waters from San Mateo Point to the Mexican Border Extending 30 to 60 nautical miles out including San Clemente Island. Tonight. West to northwest winds 5 to 10 knots. Seas 3 to 5-feet.” If you’ve ever sat by the radio, trying to decide whether to chance the run in your center console I bet you can still hear that voice in your head as you read the forecast.

The Internet has brought us new and very useful weather forecasting tools.

Sadly, without an understanding of how to interpret them these forecasts can be as vague as the broadcast voice on the radio. So, let’s take a look at how to read the forecast and break down what it means.

The forecast that I’m referring to can be found at the National Weather Service site.  After clicking on the map in the area you’ll be fishing, you will be taken to another page that shows only that sector. Once there, you can click again on the map and get a detailed forecast of where you’ll be fishing.

At the top of the page, you’ll get graphics that give you a snap shot of the weather for the coming days. Other than looking for storms or fog, this information is pretty worthless.

As you scroll down you get into the meat of the report, the Detailed Forecast. The synopsis section tells the story of why the weather is doing what it’s doing on that day. If you’re interested in how weather works, you can give it a read but it won’t do much to help you plan your next trip.

Let’s break down the daily forecast.

“This Afternoon W Wind around 10 kt.”

The report, which is obviously for the afternoon hours of the day you’re looking at it, indicates that the wind will be blowing out of the west (W) at around 10 knots. Afternoon west winds are frequent in Southern California waters and 10 knots would be a fairly calm afternoon. Just to be clear, a knot is 1.151 MPH, so they are calling for winds around 12 MPH. As a reference point, white caps usually start to form when the wind reaches 12-13 MPH.

“A slight chance of showers” means exactly what it sounds like.

Now we get to the tricky part.

Mixed swell means that there are two different swells occurring simultaneously. In this case, there is a 2-foot swell with an 8-second interval coming out of the west and a 1-foot swell with a 15-second interval coming out of the south. This graphic (courtesy of our friends in the Canadian Government’s weather department) shows how this is calculated. 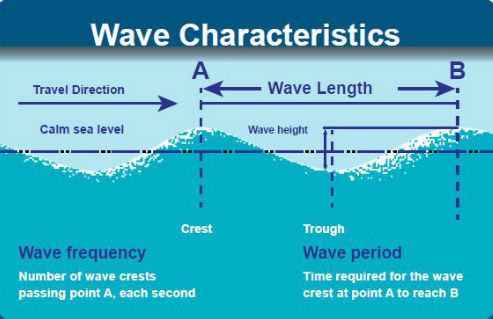 The swell height is the measurement from the crest of the wave to the trough. The interval is the amount of time between wave crests (wave length). So, in this case, there is a 2-foot swell coming out of the west at a distance where a wave crest will pass a stationary point every 8-seconds. In other words, they’re calling for a fairly calm ocean.

The mistake that many boaters make is to only look at the swell height and ignore the interval when checking the weather. Take for example a 4-foot swell. At a 20-second interval it would be difficult to even detect that there was a swell. But if you change that interval to 6-seconds, it’s going to be extremely rough. A good rule of thumb is that unless the swells are over 8-feet, if the interval is at least twice the wave height, you should be good to go.

There are however certain things that can change that, the worst of which is current. 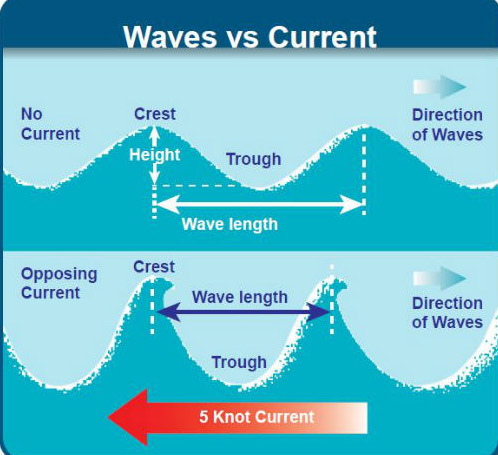 Let’s say you’re heading out and they’re calling for 4-foot swells at a 10-second interval. On a windless day, this would make for some smooth sailing. But if the current happens to be running opposite the swell it can make things very ugly very quick. The current will compress the wave length and cause the swells to stand straight up and make for a horrible ride.

Wind waves are exactly what they sound like, waves created by wind. When looking at the forecast, it’s important to note that these wind waves exist independently of the swell. In this forecast, the wind (W Wind around 10 kt.) is blowing in the same direction of the swell, so while it might seem a little rougher than the 2-foot at 8-seconds forecast would indicate, it’s not that big of a deal.

If that wind were blowing out of the south it would be a different story all together. Wind blowing against or at an angle to the swell will cause wind waves that collide with the swell to create washing machine conditions. It’s also important to note that the longer the wind blows from a particular direction, the larger the wind waves will be. So, if it’s been blowing out of the south all night and there is a west swell running, it’s going to be rough on the water the next morning even if there’s not a breath of wind.

Once you understand what you’re reading, it’s important to make mental notes of how the actual weather and water conditions feel in relation to the forecast. That way, you’ll be able to build a better understanding of what optimal and not so optimal boating conditions look like. This can save you the hassle of having to turn around and cancel a trip because the water was rougher than you expected.